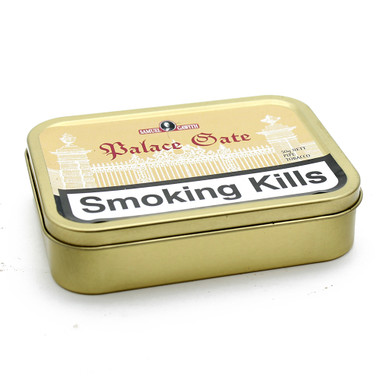 Until 2013 this tobacco had not been on the market in the UK, it could only be purchased from Russia, Canada and a few other places around the world. But after much pressure and angry posts on Forums we can now get hold of it. Due to its rarity this tobacco is not known that well among UK smokers, but we hope to change all of that. While Samuel Gawith may be famed for their Virginia and Latkaia blends, Bob (head blender) occasionally pulls and aromatic out of the bag and oh boy when he does, he nails them.

Built on a base of Virginias, a dash of Burley and a little (American style) Black Cavendish. TO give this tobacco is “Aromatic” quality, Coconut toppings are used. Not the usually sticky casing kind you would expect to find in American or Danish aromatics, but the more subdued “Toppings” you would expect a manufacture like Samuel Gawiths to produce.

As soon as you pop the seal on the tin, you are enticed with a coconut aroma and when you open it fully it hits you. While this isn’t going to win any awards for the strongest flavoured tobacco around, it’s enough to make you want to fill a bowl and give it a go.

The thick ribbon cut makes for an easy packing, it’s best not to load up too tight. Once you take a light to the bowl, the tobacco fluffs up and you are rewarded with a very tasty charring light. With a little tamping, you are in business and you see why this tobacco is so highly desired. The smoke is smooth and cool thanks to the Burley and Black Cavendish, the Virginia keeps the blend refreshing and bright. The coconut toppings add a wonderful, almost bounty chocolate filling taste to the tobacco and all the time you still get the SG Virginia flavours.