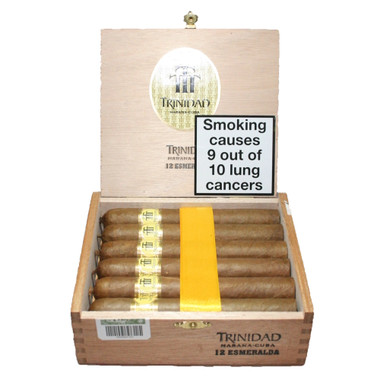 The Esmeralda, measuring 5 3⁄4” (145 mm) x 53 ring gauge is named after one of Trinidad’s most famous streets and as with previous vitolas is presented in the brand's classic Semi Boîte Nature (SBN) varnished box containing 12 cigars.

The Trinidad Esmeralda, Media Luna and Topes all follow on from the successful launch of the Trinidad Vigia in 2014 and a new and sophisticated option for smokers who prefer heavy ring gauges in a shorter format.

This new cigar has been rolled to Trinidad's classic blend of medium strength and creamy aromatic smoke. It has been made "Totalmente a Mano con Tripa Larga"- Totally Handmade with Long Filler - after a careful selection of filler, binder and wrapper leaves from the best tobacco-growing plantation in the Vuelta Abajo area in Pinar del Río province, Cuba.