We first saw the Markuź Pipes at the 2012 British Pipe Smoking Championships and instantly became friends with the carver Robert. He is a very jolly chap with a big personality and more importantly his pipes are stunning. Since deciding to start GQ Tobaccos we have been in talks with Robert and finally the day is coming when we will have some of his pipes to share with you all. 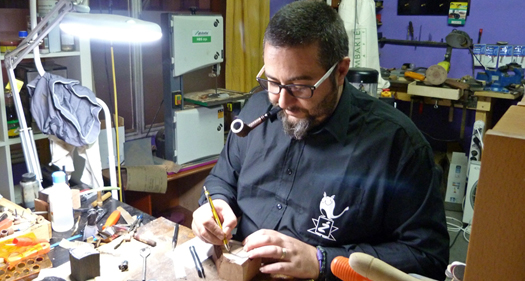 To give you a little idea of who Markuź pipes are, we did a little Q&A with Robert to find out more.

Q ) Who are you and what’s your background, how and when did you start making pipes?

My name is Robert Marcos Vierveijzer and I’m from Sabadella city nearby Barcelona, I usually work on an office but as soon as I arrive home I jump into my little workshop and I start doing what I really like...make pipes. I began making pipes by chance, I started smoking pipes in November 2008 and in the early days of 2009 I decided to make some pipe racks for my pipes, as I discovered, two pipe makers were not so far from my home, so I decided to talk with them, just to know which were their needs of pipe racks. I really get amazed with their workshops, so many different machinery and tools...I like working with wood, and all those weird machinery just amazed me more.

In March 2009, I participate in my first little championship in honour of one of the carvers I talked in early days of that year, there I win a very nice plateaux. I kept the plateaux for a year and a half or so and then I decided that I want that beauty piece of wood drilled to start trying to make a pipe... After the drills were done I started to shape the plateaux and...I get hooked!! I just want to do more!!

Q) Did you learn your entire pipe making skills yourself? Anyone who helped and gave you support?

At first I try to be by myself...but sorry, I felt not capable to reach where I intend to reach. I’ve been in touch with a lot of pipe makers, Chris Askwith, has been a big helper, at first he was my “google pipe researchpedia”, I was always asking him, and he always replied me very useful things (Thank you buddy!! You’re always been my life-saver). Dirk Claessen also helped me a lot guiding me in those strange paths of what pipe making is.

And since I started to go to the Championships there I met new pipe makers, with a lot of tips and tricks, James Gilliam, Rafa Martin, Jan Kloucek, Georgi Todorov, Bruto Sordini, Wojtek Pastuch...all of them great carvers and awesome person. 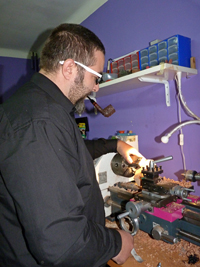 Q) What materials do you use for your pipes? (Types of Briar, Rods etc)

I normally use plateaux or extra-extra ebauchons from Bruken in Valencia, and the rods...well at the moment I’m using polyester rods from the UK. I’m always trying materials to make stems as acrylic, ebonite and polyester.

I also use exotic woods and bones for inlays.

Q) Is there any shapes you really enjoy making and even hate making?

Probably the Devil Anse is the shape I like more to do, but Canadians and Billiards also enjoyable to do.

Q) The Devil Anse’s seems to be popular shape this year?

I think since Chris Askwith made it’s first D.A. it was a normal shape, Chris took it to another point, and seeing what he was doing I also try it and not also are very nice to make they are very popular indeed, probably cause they are little and easy to carry in the pocket, you can say it’s a new kind of pocket pipe.

Q) Apart from your own pipes, which pipes make you go wow! Any carvers who work inspires you?

Most of the carvers I’ve met are always a nice inspiration and the ones I don’t know (yet) probably the US carvers like Grant Batson, Adam Davidson, Jeff Gracik, Rad Davis, Steve Liskey...are people that inspire a lot.

Now for some fun questions and I just can’t help myself here. 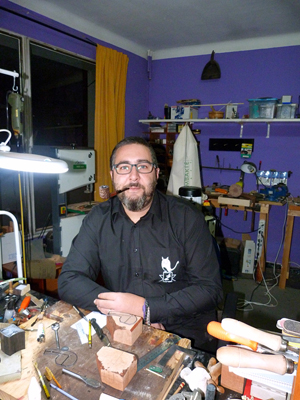 Q) What’s the difference between a Bulldog and a Rhodesian?

And I am no one to brake with the traditions

Both, and depending on the moment

Also both, loose cut at home, flake walking around.

Got any Questions about Markuź Pipes? Contact Us Today

If you have any questions about Markuź Pipes, please get in touch today.