Corn cobs have a bad reputation here in the UK and Europe, they are seen as cheap, almost toy pipe that are disposable. This organic pipe was created in America back in late 1800's and to this day very little has changed in their cultivation and manufacture. We spoke to Bob "Knightdor" Carter, who i one of the biggest corn cob advocates on youtube. 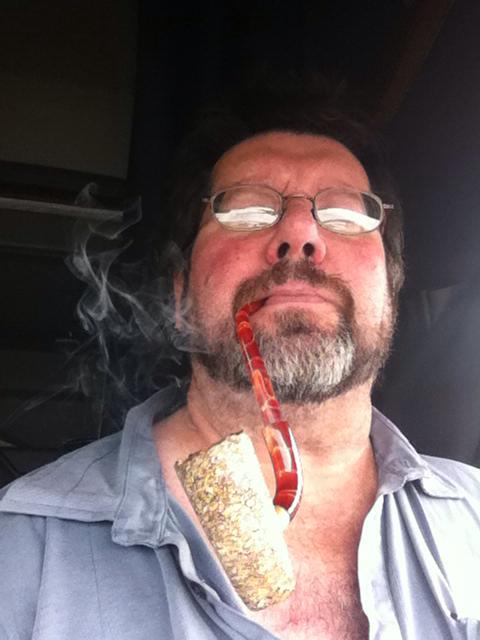 Glynn: Bob you’re a bit of a Corn Cob Legend within the online communities and I wonder if you could share a little of your knowledge, with all things cob.

Bob: I get asked a lot, I mean a lot of why I like cobs so much.  Since I own 65 MM (Missouri Meerschaum) cobs, I guess you can say I like them. When I first got interested in pipes in 2004 I decided to learn about it first and not just jump into smoking. I spent maybe 6 months on YouTube and various pipe forums, learning about pipe smoking before I ever picked up a pipe.

Glynn: Missouri Meerschaum (MM) are not the only Corn Con Pipe producer out there, what is it about their pipes that got your interest?

Bob: I found MM Diplomats to be very attractive. So I learned all I could about cobs. My first pipe in 2004 was a MM Diplomat. I still own it and smoke it a couple times a week despite having so many pipes, I don't need to. In all this time because of proper maintenance I've never had a MM Cob burn out. MM cobs are made from a special breed of corn, developed just for them to be almost as hard as wood. No other corncob pipe maker has this corn so don't waste your time buying anything but MM cobs. Never ever buy Chinese cobs. I bought one once out of curiosity It burst into flames on its 3rd bowl. Nuff said.

Glynn: Corn Cob Pipes are highly recommended for sampling blends, I use them my self for this reason. What is about Cobs that give them the clean taste? 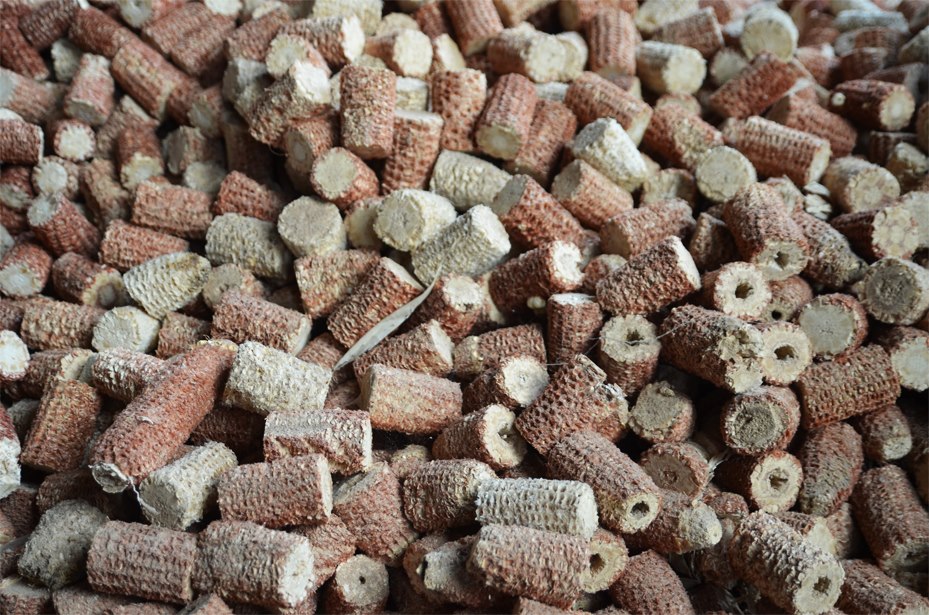 Bob: Cobs (like clay and meerschaum) have a very neutral taste compared to wooden pipes. If you ever want to taste what a new blend of tobacco tastes like smoke it in a cob. Unless its brand spanking new a wood pipe, it will always have previous flavours attached to it. It's darn near possible to ghost a cob and they retain their neutral taste even after years of smoking. With a briar pipe you almost always have a separate pipe for English/Oriental, Aromatics, and Virginia blends. With a cob you don't need to do, this because they don't retain flavours from previous blends. You can use the same cob all day and switch back and forth from aromatic to English and it won't hurt the taste of each new bowl.

Glynn: Like Clay Pipes can Corn Cob Pipes be smoked heavily for days on end?

Bob: You can use the same cob several times a day without harming the pipe. Yes some briars can do this, for awhile, but not an extended period of time. The briar pipe would eventually get damaged, the cob won't. As an experiment I once smoked the same cob .... A MM General..... Repeatedly everyday for every bowl I smoked. I was smoking 10-15 bowls a day at the time and smoked the same cob for 3 months, before I got bored with the experiment. Could you do that to a briar without burning it up? The reason I could smoke the same cob so much and you couldn't do that to a briar is because of breathability. Corn Cobs breathe far better then wooden pipes. This allows them to dissipate the heat better, which allows for a cooler smoke (less tongue bite) As they dissipate heat so well,  you can smoke them over and over.  All you have to do is maintain it properly. 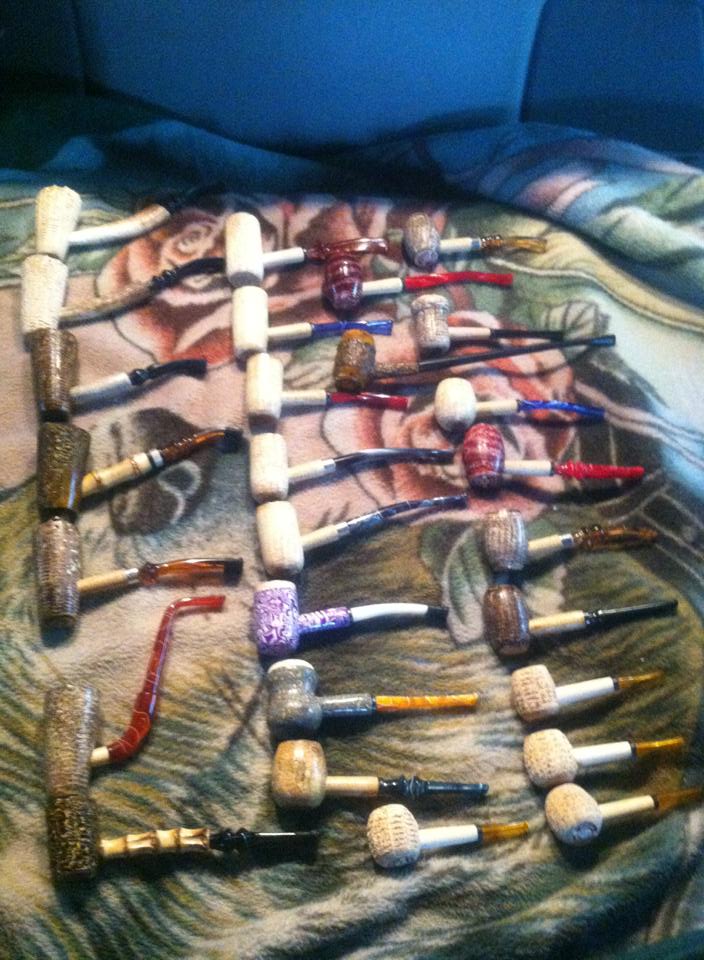 Glynn: With Corn Cobs being such good pipes, you would expect to see more smoking them?

Bob: Most people have a certain snobbery when it comes to pipes. They believe a cob can't smoke as well as a briar, therefore to them it doesn't. I firmly believe if you can have an open mind, you'll find cobs smoke as good, if not better then your favourite Dunhill. I have several pipes in my collection that cost $1000 plus and I can honestly say they smoke as well as my cobs, but not better. But! Briar has a wonderful ability that can't be fully explained. The older it gets the better it smokes! I have 7 briar pipes in the 90 plus years of age category and I have say they do indeed smoke better then my cobs.

Glynn: To get the most out of a briar pipe, you need to look after it if you want to enjoy the pipe for years to come. Do Corn Cobs need as much care?

Bob: You don't maintain a cob the same way you do a briar, if you want to make it last 20 years plus. I know they are inexpensive enough to use them until they burn up and buy a new one. Why waste money if you don't need to? Also I can promise you, if that's the way you've been treating your cob, your not getting the best smoke that it has to offer. Cobs need a little bit more cleaning than a briar but not much. You can normally allow a briar to go a couple weeks between cleanings even if you smoke it everyday. A properly maintained cob should be cleaned after each smoke. Or if you are going to smoke it several times a day, at the end of the day. The reason for this is you do NOT want cake inside your cob, except under certain specific circumstances. All the best benefits of a cob revolve around its breathability, Cake hinders that.  So at the end of each day run a pipe cleaner, with alcohol thru the stem and shank. Then take a qtip dipped in alcohol and thoroughly do the inside of the bowl. Just like a briar pipe, don't get alcohol on the outside of the bowl or you'll mess up the finish. If you have an unfinished cob then that doesn't matter, splash away to your hearts content. Once youve got the inside of the bowl clean take a rolled up paper towel, stuff it inside and twist it around a few times to dry it up. You can smoke this pipe again in about 20 minutes.

Glynn: You mentioned only building up a cake in “certain circumstances”

Bob: There are certain circumstances you want to allow cake to build in your cob. That's when you plan on smoking outdoors a lot. All that breathability means that when exposed to constant wind, you can indeed burn up the cob. My advice is if you are going to smoke in the wind use briar. But here's how to protect your cob from the wind. I'm a truck driver and smoke my cobs with the window down at 60 mph. Allow some cake to build up, but not a lot. The way to do is, when you clean your pipe instead of using a qtip with alcohol for the inside of the bowl, take a rolled up paper towel, stuff it in the bowl and twist it around a few times. This will leave a thin cake

-That's it go buy a cob and enjoy

Check out Bobs YouTube channel to see more of his passion for the trusty Corn Cob Pipe.

If you have any questions about Corn Cob Pipes, please get in touch today.