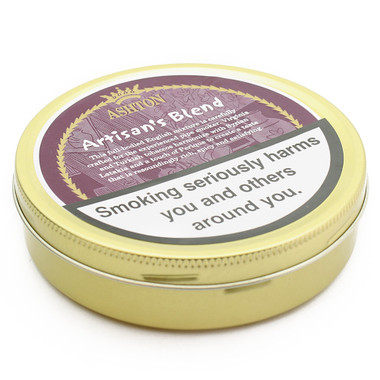 This full-bodied English mixture is carefully crafted for the experienced pipe smoker. Virginia and Turkish tobaccos harmonize with Syrian Latakia and a touch of Perique to create a taste that is resoundingly rich, spicy and satisfying

Following the success of William Ashton-Taylors pipes, R D Levin approached the high grade pipe maker and suggested a range of Cigars and Tobacco to be made under the same name. The two stuck a deal and the Ashton brand grew. This was back in 1984 and to this day these tobaccos are made to the highest quality, using the finest leafs and traditional methods, much like the Ashton pipes. In the early days the tobaccos where belended by McConnell in london for export, with the demise of McConnell as a blender saw production move to Kohlhase and Kopp.