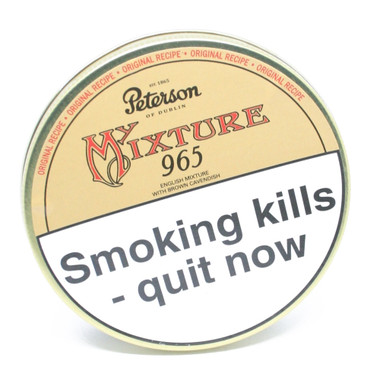 Peterson have purchased the Dunhill blend recipes, and are made in the same factory as previous Dunhill blends so you can now enjoy your old favourites again!

Back in the golden days of the UK tobacco trade, Alfred Dunhill was the biggest name for Cigars, Cigarettes, Pipes and Tobaccos. The Duke Street store was one of the UKs most prestigious tobacconists and their custom blends, known as "My Mixture" have been made for royalty and celebrities alike. With the decline of pipe smoking in the latter half of the 20th Century, saw most of the "My Mixture" disappear and eventually the rights of Dunhill tobaccos was sold off to Murrys in Ireland. My Mix 965 was the only blend from the My Mixture range that was sold worldwide, some still continued to be made in the London store (around 1993 was one of the last to be released).

If Early Morning Pipe is a blend for Breakfast and Night Cap is for Supper, then 965 has to be for Lunch (and Dinner). This outstanding tobacco is made up from Brown Cavendish (Virginia), Macedonian Bright and a good measure of Cypriot (small leaf) Latakia. The result is smooth and creamy smoke with some wonderful nutty notes and a stunning Latakia smoky character. A classic English/Balkan mixture, widely known as the quintessential English Tobacco.

When Tobaccoreviews ran their first "Hall of Fame" My Mixture 965 came in second place, behind the now unavailable Edgeworth Sliced.