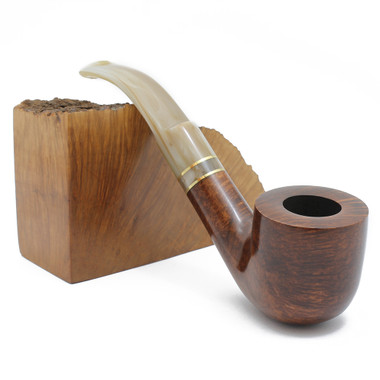 A sqaut bent Pot, finished in smooth with a brown stain. What really makes these pipes stand out is the horn looking acrylic stems and matching bands. Like all the Molina pipes, these offer stunning value for money. Molina produce pipes for some of the biggest names in Europe, using traditional equipment and techniques. Unlike many pipes from Italy, these stunning pipes from Molina do not make use of the 9mm filter.

The Molina history starts with the historic Rossi pipe factory in Barasso (Lombardy, Italy). At the time most Italian pipes were hand made at home from Olive or Box wood. Very few were exported and at the time St Claude in the French Jura mountains ruled the pipe world. The French pipe makers used saw mills, lathes and a production line approach to create stunning pipe, quickly and efficiently.

In 1880 Ferdinando Rossi one of the biggest tobacco wholesalers in Italy was visiting St Claude to purchase pipes and became obsessed with industrialised approach to making briar pipes. He soon set to work creating his own factory in Barasso and after numerous trips to purchase custom machinery, the Fabbrica di Pipe di Radica Rossi was opened in 1886. His success lay in his planning and attention to detail, Rossi even had a canal commissioned to power the machinery, lighting and heating.

By 1936 the Rossi factory now in control of Ferdinando son, who was employing around 860 workers and turning out 50,000 pipes a DAY! The bulk going to America and being smoked locally in Italy. Between the 1st & 2nd world wars, the Rossi factory was the largest pipe maker in the world. Sadly with the increase in cigarettes and developments in production methods, employed by the modern pipe companies like Stanwell, saw an end of the days of giant factories. Place like St Claude and Barasso didn’t move quick enough with the times and soon many, including Rossi closed the doors for good. Rossi closed in 1985, just one year short of their centenary.

Molina pipes are now made in the old Rossi Factory and not only using the original machinery, but also they have access to some of the Rossi secrets which helped them become so successful. Molina produce over 180,000 pipes a year, with the average pipe taking over 6 hours and utilising over 40 steps to produce a wide and diverse range of shapes, sizes and finishes.