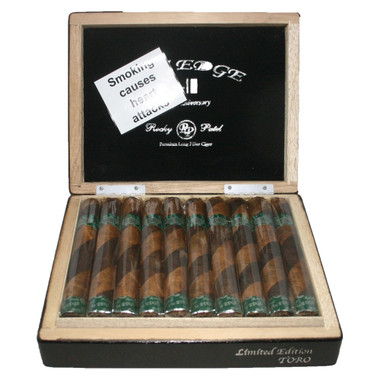 The Edge A-10 celebrates the 10-year anniversary of the original Edge brands by combining the Corojo and Maduro wrappers in a unique barber pole-style combination. The result is an exceptional flavor combination that pairs the sweetness of the Costa Rico Maduro with the earthiness of the Honduran Corojo. The Edge A-10 was originally released as a ‘limited edition’ run to remind faithful Edge lovers that the brand’s history lives on. Yet the overwhelming demand for this special cigar convinced Rocky to keep the A-10 permanently, and to keep living on The Edge!

Rocky Patel has been one of the biggest names in the new world cigar market. Rocky’s journey started back in the mid 1990’s, during the American Cigar boom when the Entertainment lawyer really got into cigars. After founding the Los Angeles Grand Havana Club, he was approached by a number of people looking to invest in Cigar factories. After a little persuasion he invested some money into a factory in Honduras and the journey began.

Rather than rehashing what every other Cigar manufacture was doing at the time, Rocky choose to stand out with not only high quality and full bodied cigars. But also with eye popping packaging and unique takes on classic shapes and making use of Maduro wrappers. Rather than producing cigars with tobaccos from the same region, rocky set about creating unique blends which made us of tobacco from all over the Americas.

Since the early days Rocky Patel cigars picked up rave reviews and a cult following, which has grown into the international success it is today.