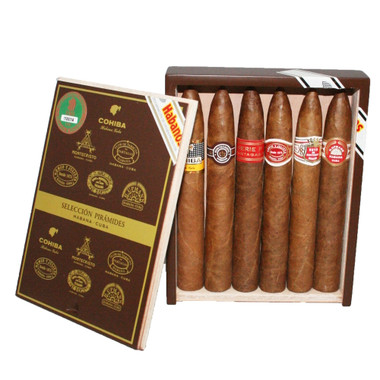 This Cigar Sampler makes the ideal gift for a cigar smoker or is perfect if you want to compare different brands and work out your favourite Cuban.

With this Piramides selection (52 ring gauge x 156mm length) you shall taste the different flavours of this widely accepted format in six of the most prestigious Habanos brands produced.

Cuba is the cradle of the cigar world, it was after all the Taino Indians who Columbus’s men saw smoking “Cohibas” (the traditional name for a cigar). Tobacco was crudely rolled into a tube and smoked for religious and relaxation purposes. Over the coming years at the start of the colonisation of the Americas, tobacco was sent back to Europe. The Spanish began importing tobacco as Cigars and also Snuff.

Over the coming century’s cultivation, curing and rolling cigars became an essential part of the Cuba trade and the cigar industry was born. Investment from European and American cigar and tobacco merchants saw the number of cigars exported for the small Caribbean grow and grow.

The flagship brand of Habanos. Made from the "selection of the selection" of tobacco leaves of San Juan y Martinez and Sans Luis districts from Vuelta Abajo zone, its additional fermenting provides this brand with a unique aroma and flavour.

Montecristo is probably the most appreciated brand by its distinctive medium to full flavour, considered by many smoker as the Habanos benchmark.

A Habano Partagas is immediately recognisable by its deep character and rich flavour.

The flavour of Hoyo De Monterrey's blend makes it an attractive choice for those who seek delicate yet aromatic Habano that is lighter to the taste with elegance and complexity.