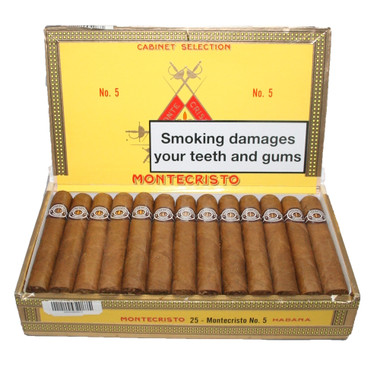 The “Monte 5” has an almost cult following, thousands of cigar smokers around the world have these on hand for those short smokes. Like it’s bigger brothers, this little Perla may only weigh in at 4” x 40 but for what it lacks in size, it certainly makes up for in taste. All the earthy, spicy, peppery flavours you find in the No5’s bigger brothers, is here just in a small format.

Montecristo is one of the biggest Habanos brands in the UK for those who enjoy a little spice and in their lives. The brand dates back to the 1935 when it was first released as part of the H Upmann range. Initially called “the H. Upmann Montecristo Selection”, it gave the H Upmann factory a stronger and bolder addition to the line. When Hunters cigar importers in the UK, took over the factory it shortened the name and introduced the current Red & Yellow logo.

The brand now sits as one of Cubas biggest brands in regards the size its total output and is highly prized among cigars connoisseurs around the world. With the exception of the “Open Series”, Montecristo cigars are very rich with a woody, leather core to the taste with a spicy side. This powerful combination makes them a little too rich to for novice smokers, but for those who love a strong cigar after a big meal, they are perfect.