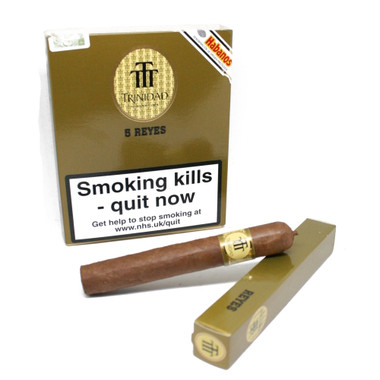 Pack of 5 Trinidad Reyes, these cigars come individually boxed and in one larger box.

The Trinidad Reyes might be a small cigar, but it certainly leaves a big impression. When you do not have much time for a cigar, a Reyes or Perla (Tres Petit Corona) is the ideal size. This offering from one of Cubas most prestigious marque, lives up to all expectations. As you would expect the Reyes is packed full of creamy smoke with notes of woods, nuts and beans. One of the best 30 minute smokes produced in Cuba, if you go by Glynns taste buds.