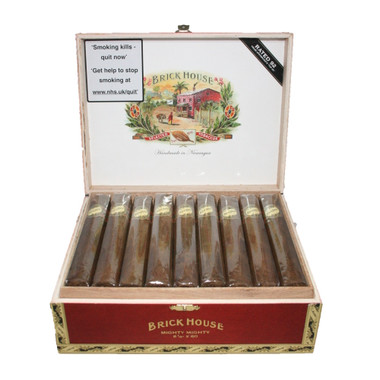 The Brick House story starts back in 1937 when J C Newman opened his cigar factory in America. Rolling with 100% Havana tobaccos for the American market, the cigars became popular and sadly the company was forced to close after the American embargo with Cuba.

JC Newman and others started seeking other Caribbean climates which could produce tobacco to match that grown in Cuba. In exodus of Cuban nationals, many who worked at all stages of the cigar manufacturing process took the seeds, tools and skills with them. This has seen a boom in the “New World Cigars” driven by American demand.

Through this innovation the brand has been resurrected using 100% pure Nicaraguan and picking up fans all over the world.

J. C Newman immigrated to the United States in 1888 and lived the American Dream. In 1895 he founded the J C Newman Cigar Company which today is America's oldest family owned premium Cigar maker. One of J C Newmands earliest brands was Brick House. With the imposing brick house featured prominently on the label. J. C launched this brand to honour his family heritage and his beloved childhood memories.

The vintage Brick house cigar label depicts the pastoral setting similar to J C Newman's childhood home - the only brick house in his village. Not only did J C Newman's brick house serve as the family's residence but is was also the towns tavern. There locals and visitors alike gathered nightly to eat, drink, smoke and enjoy each others company.

All our untubed cigars come in a sealed bag with a waterpillow as standard.