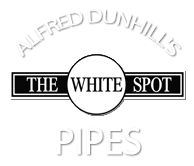 Dunhill pipes are renowned amongst pipe smokers, with Dunhill smoking products being the epitome of every pipe smokers world.

Due to careful quality control, only 5% of the worlds Briar is good enough for a Dunhill pipe with every block carefully examined before manufacturing begins. Even the most minor natural mark in the briar grain will be considered a defect, with those pipes put in the bin.

The mouthpiece of each Dunhill pipe is hand-cut from a solid rod of 'Vulcanite', a rubber compound that is tough but easy on the teeth and does not taint the smoke. Its colour could be black or marbled brown (Cumberland), with the little white spot still seen as a symbol of perfection and style for pipe smokers. Dunhill pipes have an exceptionally long life, with even refurbished 'estate' pipes considered collectables.

The History of Dunhill Pipes

Alfred Dunhill opened his first tobacco shop on London’s Duke Street in 1907, where he initially imported his tobacco pipes up until 1912. This is when he introduced the ‘White Spot Dot’, which was deemed the correct position for hand-cut mouthpieces. From this day the esteemed and recognisable White Spot Tobacco Pipe was born.

The White Spot logo has remained untouched for over 100 years, with the current range of tobacco pipes still reflecting Alfred’s vision for superior pipes.

During World War II, Dunhill took the product onto the international stage, with orders placed by an officer serving in Northern France. Additional pipes were sent out, with a note asking them to be distributed among other officers and they only be paid for on their return. From here Dunhill pipes were sold to British, American, French, Belgian and Canadian officers, firmly putting Dunhill on the map as an international brand of tobacco pipes.

Over a Century of Quality Smoking Pipes

Dunhill has maintained its original mission statement and is still producing some of the highest quality smoking instruments and accessories available on the market.

You will not find a better quality smoking pipe than a Dunhill!

Their pipes come in over 6 sizes with a large variety of models and countless shapes available now at GQ Tobaccos.

Get in Touch to Find Out More

GQ Tobaccos have over 100 White Spot pipes currently in stock, making us one of the UK’s largest suppliers of Dunhill pipes.

Contact us now for more information or to place an order. We also have the widest range of rolling tobacco, lighters and other smoking accessories available now.