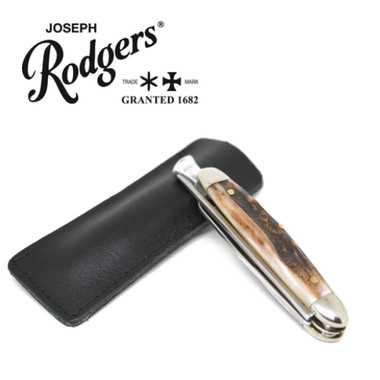 This is the most premium smokers knife from Rodger's of Sheffield, made from a stag horn. The Rodgers pipe knifes has been the benchmark for high quality pipe tools for decades and they last that long too. Each knife is skilfully produced and contains a blade for cutting Plugs & Twist, with a rounded tip, to avoid damaging the bowl. A long pick for removing dottle out of the bowl and keeping the air hole (shank) ash free. Then to ensure your tobacco is packed correctly for a cool smoke, the knife features a tamper. Every pipe smoker should own a good quality knife and no one does this better than Rodgers.

Sheffield historically the home of English steel. The local resources; Coal, Iron and water made this the ideal for steel production. With the increase of cheaper Steel and manufacturing overseas has seen a drastic decline in the output. Even though the city still produces 500,000 tonnes a year and much of this sill used in Cutlery and knife manufacture. Rodgers has been one of the UK’s premier cutlery manufactures since the 1700s and has been issued several royal warrants of the centuries.