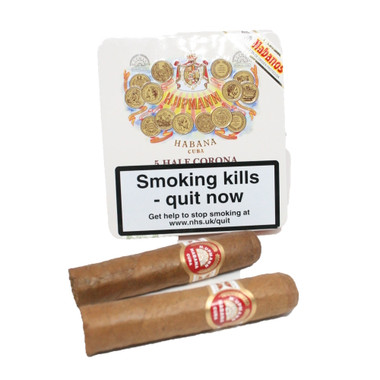 The H Upmann half corona represents a revival of this once popular vitola, which we had not seen from Cuba since the Second World War.  It was first created for the Melbourne Hart & Company cigar importers back at the start of the 1900’s. The company’s director was after a cigar which he could smoke during the intermission at the theatre. After some back and forth with the factories in Havana, the “half-a-corona” was born. Other marques also brought out cigars in this format and its size became one of the most popular in Britain at the time. With the War and eventual revolution on the Caribbean island, saw this size gone and pretty much forgotten.

Until 2011 when as a result of the smoking bans throughout Europe saw this format of cigars back in demand and Habanos SA re issuing the size for H Upmann once again. Since its reintroduction, the H Upmann half corona has become a firm favourite among cigar smokers the world over. In fact during Glynn’s visit to Cuba, saw him smoke his way through several boxes with others on the trip. The short format makes for a 20 minute smoke, ideal for a quick smoke outside restaurants, bars or of course even during theatre intermissions. All the signature flavours you would expect from H Upmann are there, all that straight and light tobacco flavours. Hints of earth, nuts, aromatic woods and dash of beans.

All prices are in USD.