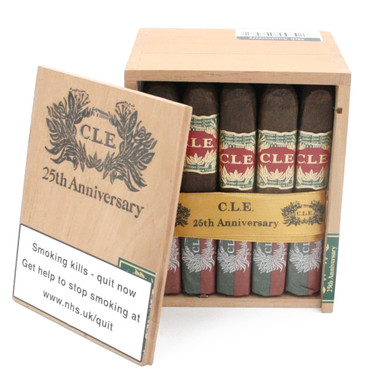 Anniversaries of any sort tend to be a big deal in the cigar world, so when Christian Eiroa announced a brand new blend in 2020 to mark a specific milestone in his life, it was not exactly a surprise. However while the new cigar is named the CLE 25th Anniversary, it was not released to commemorate the CLE brand’s 25th anniversary; instead it was created to celebrate the 25 years Christian Eiroa has spent in the cigar industry.

Blend wise the CLE 25th Anniversary incorporates Honduran tobacco for the filler, binder and wrapper. These medium cigars have notes of roasted coffee, wood and chocolate with hints of macadamia & caramel.

The C.L.E Corojo is a handmade cigar from Honduras, all of the tobaccos in this cigar are from Honduras. These are a full flavoured cigars fine tasting cigars. The cigars are wrapped in Christian Eiroa's signature Corona wrapper.

Christian Eiroa initially made his name by creating Camacho into one of the most well-known and renowned cigar brands and in 2008, sold it to Oettinger Davidoff.

Probably the biggest mark that he made on the world of cigars was his predilection for Corojo tobacco. Christian led the tobacco variety into a new heyday. And with his latest brands like Eiroa, CLE or Asylum he is - conservatively formulated - extremely successful in his business.

"Every cigar we produce is made with precision, care and excellence. Only the finest tobacco is cured to present these selections to you and we take the utmost pride in every aspect of creating each masterpiece from seed to smoke"